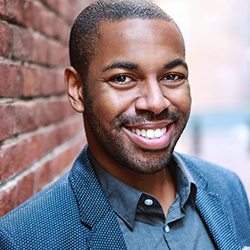 STEVEN MARTIN will make his New Repertory Theatre debut with this production of 1776. Recent credits include playing the Tin Man in The Wiz (Lyric Stage Company), Olen in The Scottsboro Boys (SpeakEasy Stage Company), Eddie in The Wild Party (Moonbox Theater), Jim Conley in Parade (Footlight Club) and Agwe in Once on This Island (Blue Spruce Theater). He holds a Masters of Music in Opera Performance from The Boston Conservatory, and a Bachelors of Music in Voice Performance from the University of North Carolina – Greensboro. Originally from Madison, NC, he now resides in Dorchester, MA.