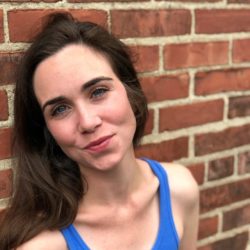 Kimberley Gaughan makes her New Repertory Theatre debut with this production of Trayf. Regional acting credits include Judith in Equivocation at Actors’ Shakespeare Project; Mary Warren in The Crucible at Theatre South Carolina; and Sophie in Flight at the Center for Performance Experiment. Other credits include upcoming direction of King John at Praxis Stage, and serving as the Assistant Director for Romeo & Juliet at Commonwealth Shakespeare Company Stage 2. Gaughan holds an MFA in Acting from University of South Carolina, and a BA in Theatre from University of Notre Dame. Gaughan teaches at Massasoit Community College, and is a company member of Theatre Nohgaku, an international performance ensemble dedicated to Noh. Originally from Scituate, MA, she currently resides in Somerville, MA.