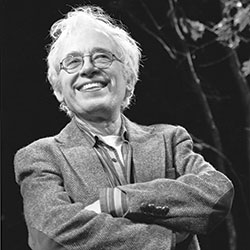 AUSTIN PENDELTON  returns to New Repertory Theatre after directing Fiddler on the Roof and performing in Quills, Waiting for Godot, and King Lear. He is also the recipient of New Rep’s 2015 Award for Lifetime Artistic Achievement. Mr. Pendelton is an actor, director, playwright, and a teacher of acting at HB Studio in New York. As an actor he made his Broadway debut in the original production of Fiddler on the Roof, which was directed by Jerome Robbins. Subsequent Broadway productions in which he has appeared include Hail Scrawdyke (Clarence Derwent Award winner), Mike Nichols’ production of The Little Foxes, Doubles, and The Diary of Anne Frank (with Natalie Portman and Linda Lavin, in a new adaptation by Wendy Kesselman). He has also acted extensively off-Broadway and in other regional theatres, notably Chicago’s Steppenwolf Theatre, where he is a member of the Ensemble. He has acted in about 200 movies, and on such TV shows as Oz and Homicide, in each of which he has appeared in recurring roles. He has directed on, off, and off-off Broadway, at the Williamstown Theatre Festival (where he apprenticed under the guidance of Nikos Psacharopoulos), as well as at the National Theatre of Great Britain. His plays, published and produced in New York, around the country, and internationally, are Orson’s Shadow, Uncle Bob, and Booth.