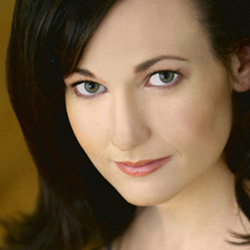 AIMEE DOHERTY returns to New Repertory Theatre after being seen as Snow Queen in The Snow Queen, Marry Me a Little, Maureen in Rent, Karen in Speed the Plow, Kathy in The Last Five Years, Sally in Cabaret, Susan in …tick, tick BOOM!, Evelyn Nesbit in Ragtime, and Cinderella in Into the Woods among others. Other recent credits include Rosalind in As You Like It (Shakespeare & Company), Sally Bowles in Cabaret (Moonbox Productions), Gussie in Merrily We Roll Along (Huntington Theatre Company), Illona in She Loves Me (Greater Boston Stage Company), and performing as a soloist with the Boston Pops under the baton of Keith Lockhart at Symphony Hall. Aimee is a two-time Elliot Norton Award winner, and a two-time IRNE Award winner for Best Actress in a Musical. Originally from Bellingham, MA she now resides in Walpole, MA.