New Repertory Theatre is proud to announce that arts leader, director, choreographer, and playwright Michael J. Bobbitt will serve as Artistic Director, beginning August 1, 2019. Bobbitt joins New Rep after twelve years as Artistic Director of Adventure Theatre-MTC (Musical Theatre Center) in Maryland, where he led the organization to be one of the most respected theatre/training companies in the DC region, as well as one of the nation’s most influential professional theatres for young audiences.

“After an extensive national search,” shares New Rep Board President Chip Phinney, “during which we reviewed many highly-qualified candidates, our succession planning committee unanimously recommended Michael to be the next Artistic Director of New Rep, and our Board of Directors enthusiastically agreed.”

“I look forward to welcoming Michael to our New Rep team,” shares New Rep Managing Director Harriet Sheets. “His proven track record of leading and growing Adventure Theatre-MTC will certainly help guide New Rep as we look to continue both building and diversifying our audience. Michael’s commitment to including all audiences and his interest in developing new works will continue to support our mission. New Rep has much to celebrate as we enter our 35th Anniversary Season and look brightly to the future.”

“I am excited to expand my family into the Boston area, especially with my new colleagues and friends at New Rep,” shares incoming Artistic Director Michael J. Bobbitt. “The conversations I’ve had with Harriet, Jim [Petosa], the Board, the staff, and the search committee members have been invigorating, exciting, and heartfelt. Our discussions have given me a real snapshot of the New Rep community, what’s important to them, and how it translates theatrically. As we enter New Rep’s 35th Anniversary Season, I look forward to learning more by diving into more conversations with subscribers, donors, artists, and the New Rep family. I also look forward to collaborating with all involved to continue New Rep’s commitment to excellence.”

“Also, on behalf of New Rep’s board and staff,” Sheets continues, “we extend sincere thanks and well wishes to our departing Artistic Director Jim Petosa. During Jim’s New Rep eight-season tenure, he programmed poignant and timely productions, developed an impactful education vision, aligning so well with our mission, and served as an inspiring leader and colleague to our New Rep family. I have truly enjoyed our co-leadership partnership and he will be missed.” 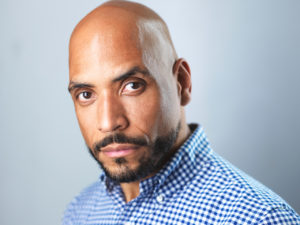 Michael J. Bobbitt is an arts leader, director, choreographer, and playwright and has served as Artistic Director for Adventure Theatre-MTC in Maryland since 2007, where he led the organization to be a respected theatre/training company in the DC region, as well as a nationally influential professional

As a writer, his work was chosen for the NYC International Fringe Festival and The New York and Musical Theatre Festival. He has two plays published by Rogers and Hammerstein Theatricals. He trained at Harvard Business School’s Strategic Perspectives in Nonprofit Management, The National Arts Strategies Chief Executive Program, and other top leadership programs. He earned the Excel Leadership Award (Center for Nonprofit Advancement) the Emerging Leader Award (County Executive’s Excellence in the Arts and Humanities), and Person of the Year Award (Maryland Theatre Guide), among others.